The trophy was handed over to directors Jeremy and Mandy Ridyard by Sharing in Growth chairman Dr Bryan Jackson CBE in front of the 75 strong Produmax team and 30 guests including customers such as Boeing, Moog and SL Engineering, and partners such as the Advanced Manufacturing Research Centre, Bradford council, Keighley College and the West Yorkshire LEP.

The event took place in Prodmax’s new 15,000 sq metre plant which will be officially opened later this year. The second plant - named Produmax Plus - is part of the family-owned firm’s ambitious growth strategy which is being supported by Sharing in Growth (SiG).

Produmax, global experts in flight control components and assemblies, joined SiG in 2014 and last year won the first Sharing in Growth Ikigai top trophy. The judges selected Produmax for the Inspire award this year because the Yorkshire company has put engagement and people development at the centre of the business. With SiG support, Produmax has increased turnover by 55%, increased headcount by 85% to 75 people and secured contracts worth over £50 million.

Mandy and Jeremy Ridyard, co-owners of Produmax, global experts in flight control components which exports 80% of its production to USA, Canada, Japan, Morocco, the Philippines, and Italy, and three of the firm’s team, explained how Produmax had set a vision of being engineering superheroes to engage and inspire their team so they could further develop their skills and contribute to growing the business.

With help from Sharing in Growth, as well as Bradford City Council and the local LEP, Produmax invested in a new plant at Baildon along with the latest machining technology, and developed the skills of its team. This helped to double the return on assets, improved productivity by almost 40% and won three new customers so Produmax could further invest in the future including the new Produmax Plus plant on the same Baildon site. The company has also set up links with universities, colleges and schools and has created its own apprenticeship programme and will shortly launch a leadership development programme.

Said Mandy, who bought the firm with husband Jeremy in 1997, : “Back in 2014 we had won a contract from Moog for the Boeing Dreamliner aircraft and, while we had the quality, experience and creativity to deliver, we were struggling for capacity in our plants in Otley and Yeadon. So we turned to Sharing in Growth, the industry-led programme which brings world-class expert training and coaching to support ambitious aerospace companies. We’ve achieved results that the Government would snap their hand off for and now our ambition is to get to £50 million turnover by 2025 by continuing to develop our people, our factory and our business.”

Said Sharing in Growth operations executive Malcolm James: “Our role is to work shoulder-to-shoulder with companies to help them compete against overseas competition. We’ve taken more than 60 companies on a multi-year journey to world-class best practice and growth, enabling them to achieve their ambitions to double in size. Companies on the Sharing in Growth programme have secured more than £2.5 billion in contracts so we are well on target to secure 10,000 UK jobs by 2022. The Produmax team may have been one of the smallest companies we selected but their phenomenal success has proved that our programme can beat the UK’s productivity challenge.”

Sharing in Growth is the aerospace business transformation programme, set up by industry in 2013 and supported by the Regional Growth Fund and more than £150 million in private investment. It is endorsed by Airbus, BAE Systems, Boeing, Bombardier, GE, GKN, Leonardo, Lockheed Martin, MBDA, Rolls-Royce, Safran and Thales because it is helping the UK advanced manufacturing supply chain to become more competitive and win a larger share of global aerospace contracts.

Handing over the Inspire trophy SiG chairman Dr Jackson, former chief executive of Toyota UK, congratulated the whole Produmax team on the achievement. He said: “When I read reports that GDP is flatlining, I tell people to visit Produmax to understand how to improve productivity. It’s about culture and harnessing team effort to achieve results so you should be very proud of what you have achieved as a team.”

These sentiments were endorsed by Moog, global experts in precision motion control. Allan Jamieson, global manufacturing engineering manager, joined the celebrations, handing over a raft of individual and team awards won by the Produmax team including long-service recognition, qualifications and sports trophies.  He said: “I travel around the world constantly and see lots of factories so I know that people make a successful factory. Each and every one of you should be congratulated for your way of thinking, innovation and behaviours that mean we are really happy to work with you. I thank you and Sharing in Growth. Please keep up the good work.”

Among the awards presented were: Bradford College Engineering Employer of the Year to operations director Paul Birtles, Keighley and Airedale Outstanding Apprentice Award and IET Student Excellence Award for West Yorkshire to Jasmine Hibbert and Best Vocational Skills Award to Sam Sanders. More than 40% of the Produmax team have gained or are studying for qualifications.

At the event, lighthouse cell leader Joe Sewell of Addingham, quality apprentice George Johnson of Skipton and IT facilitator Iain Evans of Keighley gave presentations on how they had developed and had the freedom to contribute to the company’s growth. They also unveiled details of Produmax Plus which, alongside the new plant, comprised exploring future technologies and a talent pool to support them including additive manufacturing in plastics and metals, cyber security, cobots, cryogenic machining and swarm manufacturing.

There are limited places left on the government-supported Sharing in Growth programme. Companies interested in how the programme can improve their competitiveness and productivity should register at: www.sig-uk.org/apply. 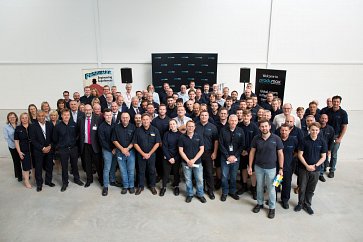 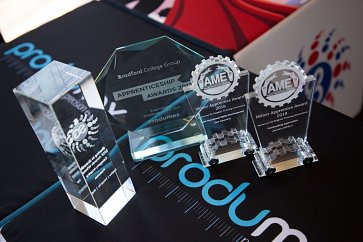 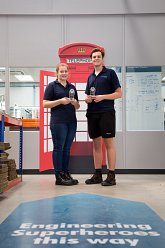 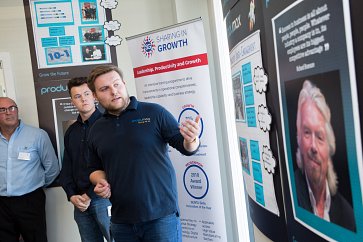 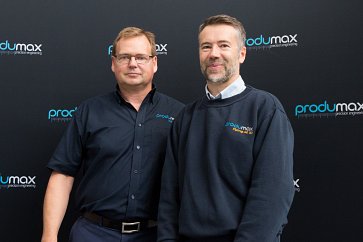 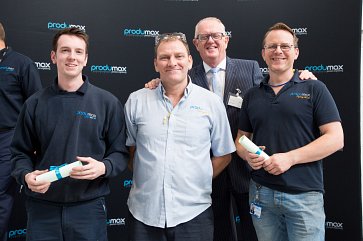 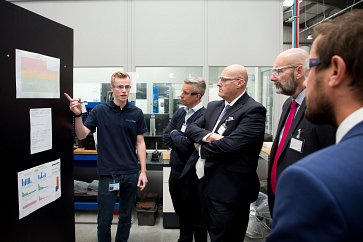